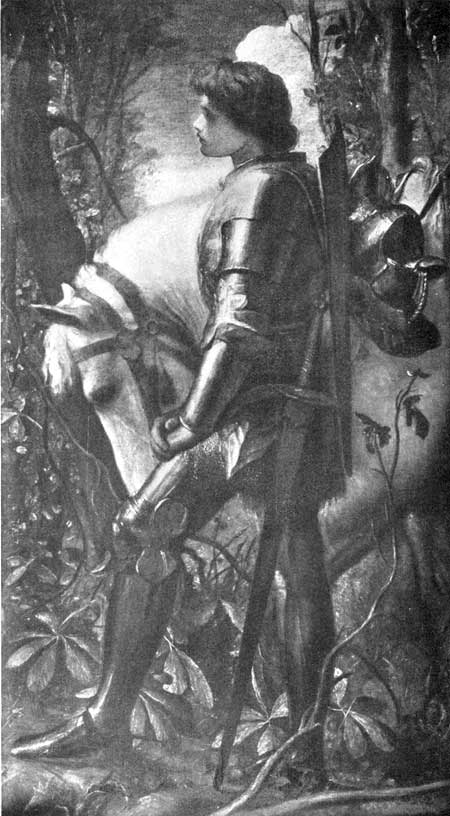 My good blade carves the casques of men,
My tough lance thrusteth sure,
My strength is as the strength of ten,
Because my heart is pure.

The shattering trumpet shrilleth high,
The hard brands shiver on the steel,
The splinter’d spear-shafts crack and fly,
The horse and rider reel:

They reel, they roll in clanging lists,
And when the tide of combat stands,
Perfume and flowers fall in showers,
That lightly rain from ladies’ hands.

How sweet are looks that ladies bend
On whom their favours fall!
For them I battle till the end,
To save from shame and thrall:
But all my heart is drawn above,
My knees are bow’d in crypt and shrine:
I never felt the kiss of love,
Nor maiden’s hand in mine.
More bounteous aspects on me beam,
Me mightier transports move and thrill;
So keep I fair thro’ faith and prayer
A virgin heart in work and will.

When down the stormy crescent goes,
A light before me swims,
Between dark stems the forest glows,
I hear a noise of hymns:
Then by some secret shrine I ride;
I hear a voice, but none are there;
The stalls are void, the doors are wide,
The tapers burning fair.
Fair gleams the snowy altar-cloth,
The silver vessels sparkle clean,
The shrill bell rings, the censer swings,
And solemn chaunts resound between.

Sometimes on lonely mountain-meres
I find a magic bark;
I leap on board: no helmsman steers:
I float till all is dark.
A gentle sound, an awful light!
Three angels bear the holy Grail:
With folded feet, in stoles of white,
On sleeping wings they sail.
Ah, blessed vision! blood of God!
My spirit beats her mortal bars,
As down dark tides the glory slides,
And star-like mingles with the stars.

When on my goodly charger borne
Thro’ dreaming towns I go,
The cock crows ere the Christmas morn,
The streets are dumb with snow.
The tempest crackles on the leads,
And, ringing, spins from brand and mail;
But o’er the dark a glory spreads,
And gilds the driving hail.
I leave the plain, I climb the height;
No branchy thicket shelter yields;
But blessed forms in whistling storms
Fly o’er waste fens and windy fields.

A maiden knight–to me is given
Such hope, I know not fear;
I yearn to breathe the airs of heaven
That often meet me here.
I muse on joy that will not cease,
Pure spaces clothed in living beams,
Pure lilies of eternal peace,
Whose odours haunt my dreams;
And, stricken by an angel’s hand,
This mortal armour that I wear,
This weight and size, this heart and eyes,
Are touch’d, are turn’d to finest air.

The clouds are broken in the sky,
And thro’ the mountain-walls
A rolling organ-harmony
Swells up, and shakes and falls.
Then move the trees, the copses nod,
Wings flutter, voices hover clear:
“O just and faithful knight of God!
Ride on! the prize is near”.
So pass I hostel, hall, and grange;
By bridge and ford, by park and pale,
All-arm’d I ride, whate’er betide,
Until I find the holy Grail.

“It is not our part to master all the tides of the world, but to do what is in us for the succour of those years wherein we are set, uprooting the evil in the fields that we know, so that those who live after may have clean earth to till. What weather they shall have is not ours to rule.”

But despair is expressed precisely by the fact that a person is unaware of being characterized as spirit.

Even that which, humanly speaking, is the most beautiful and lovable thing of all, a feminine youthfulness which is sheer peace and harmony and joy — even that is despair. For this indeed is happiness, but happiness is not a characteristic of spirit, and in the remote depths, in the most inward parts, in the hidden recesses of happiness, there dwells also the anxious dread which is despair;

it would be only too glad to be allowed to remain therein, for the dearest and most attractive dwelling-place of despair is in the very heart of immediate happiness.

All immediacy, in spite of its illusory peace and tranquility, is dread, and hence, quite consistently, it is dread of nothing; one cannot make immediacy so anxious by the most horrifying description of the most dreadful something, as by a crafty, apparently casual half word about an unknown peril which is thrown out with the surely calculated aim of reflection;

yea, one can put immediacy most in dread by slyly imputing to it knowledge of the matter referred to. For immediacy doubtless does not know; but never does reflection catch its prey so surely as when it makes its snare out of nothing, and never is reflection so thoroughly itself as when it is . . . nothing.

There is need of an eminent reflection, or rather of a great faith, to support a reflection based upon nothing, i.e. an infinite reflection.

So even the most beautiful and lovable thing of all, a feminine youthfulness which is sheer peace and harmony and joy, is nevertheless despair, is happiness. Hardly will one have the good hap to get through life on the strength of this immediacy. And if this happiness has the hap to get through, it would be of little help for it is despair. Despair, just because it is wholly dialectical, is in fact the sickness of which it holds that it is the greatest misfortune not to have had it — the true good hap to get it, although it is the most dangerous sickness of all, if one does not wish to be healed of it. In other cases one can only speak of the good fortune of being healed of a sickness, sickness itself being misfortune.

Therefore it is as far as possible from being true that the vulgar view is right in assuming that despair is a rarity; on the contrary, it is quite universal.

But precisely this is the common situation (as the physician of souls will doubtless concede), that the majority of men live without being thoroughly conscious that they are spiritual beings — and to this is referable all the security, contentment with life, etc., etc., which precisely is despair.

Those, on the other hand, who say that they are in despair are generally such as have a nature so much more profound that they must become conscious of themselves as spirit, or such as by the hard vicissitudes of life and its dreadful decisions have been helped to become conscious of themselves as spirit — either one or the other, for rare is the man who truly is free from despair.

Ah, so much is said about human want and misery — I seek to understand it, I have also had some acquaintance with it at close range; so much is said about wasted lives — but only that man’s life is wasted who lived on, so deceived by the joys of life or by its sorrows that he never became eternally and decisively conscious of himself as spirit, as self, or (what is the same thing) never became aware and in the deepest sense received an impression of the fact that there is a God, and that he, he himself, his self, exists before this God, which gain of infinity is never attained except through despair.

And, oh, this misery, that so many live on and are defrauded of this most blessed of all thoughts; this misery, that people employ themselves about everything else, or, as for the masses of men, that people employ them about everything else, utilize them to generate the power for the theater of life, but never remind them of their blessedness; that they heap them in a mass and defraud them, instead of splitting them apart so that they might gain the highest thing, the only thing worth living for, and enough to live in for an eternity — it seems to me that I could weep for an eternity over the fact that such misery exists!

And, oh, to my thinking this is one expression the more of the dreadfulness of this most dreadful sickness and misery, namely, its hiddenness — not only that he who suffers from it may wish to hide it and may be able to do so, to the effect that it can so dwell in a man that no one, no one whatever discovers it; no, rather that it can be so hidden in a man that he himself does not know it!

And, oh, when the hour-glass has run out, the hourglass of time, when the noise of worldliness is silenced, and the restless or the ineffectual busyness comes to an end, when everything is still about thee as it is in eternity — whether thou wast man or woman, rich or poor, dependent or independent, fortunate or unfortunate, whether thou didst bear the splendor of the crown in a lofty station, or didst bear only the labor and heat of the day in an inconspicuous lot; whether thy name shall be remembered as long as the world stands (and so was remembered as long as the world stood), or without a name thou didst cohere as nameless with the countless multitude; whether the glory which surrounded thee surpassed all human description, or the judgment passed upon thee was the most severe and dishonoring human judgement can pass —

…More to come in piece XII

What power art thou, who from below
Hast made me rise unwillingly and slow
From beds of everlasting snow
See’st thou not ( how stiff )) and wondrous old
Far unfit to bear the bitter cold,
I ( can scarcely move or draw my breath ))
Let me, let me freeze again to death.)

The gardener’s son was standing by;
Three flowers he gave to me
The pink, the blue, and the violet, too,
And the red, red rosy tree,
The red, red, rosy tree.