Deep in central France among lush green fields and acres of vineyards stretching as far as the eye can see, is the ancient French town of Saumur. The origin of its name stems from the Latin, sal murus, meaning the small fort in the swamps. The pre-history of the area goes back into the mists of time when clans of people built huge structures out of mammoth stones as temples to worship their gods, bury their dead, and to follow the paths of the stars across the heavens. Time passed, and in the 10th century, the Count of Blois built a monastery and fortification amongst these stones and a large village began to grow around them.

In the 12th century, a fundamental alliance between France and England began when the powerful French Eleanor of Aquitaine and the powerful English Henry Plantangenet were married. Henry was the adopted son of King Stephen of England, known in France as Etienne de Blois. Not too long after the marriage, Henry became King Henry II of England and Eleanor his queen. Turmoil, was the usual turn of events in that time, and their rule was not exempt, being fraught with battles, border disputes, and court intrigues. The course of history for Saumur continues with a colorful and troubled history through the years. However, after surviving heavy bombing during WW II, the picturesque town of Saumur began to find peace beside the gently flowing waters of its river, the royal Loire.

The Chateau of Saumur

In the Loire Valley, every town of a certain size has a storybook chateau in its back yard, and Saumur is no exception. In 1246, Louis of Anjou altered the Chateau from a fortress into a livable palace for pleasure, parties, and hunting. The graceful, Chateau with its shining white walls and turrets of local tufa stone projects a watchful stability over the town from its perch on the highest hill in the area. Inside the chateau are two interesting museums. One is the Musee des Arts Decoratifs specializing in porcelain from the 19th century, and Flemish tapestries. The other museum is the Musee de Cheval recounting the history of the horse from antiquity to the present.

If you happen to be strolling by an open field and see a chimney incongruously sticking up out of the ground, you should guess that you are walking on top of a Troglodyte dwelling. Saumur has a very large number of cave dwellers, as does the entire Loire Valley region. When there were not caves, man dug into the sides of mountains for shelter. The natural Tufa stone of the area is fairly easy to cut and makes digging into the sides of hillsides not too difficult. Mankind has been living in caves or under ground since the beginning of time and there seems to be some positive reasons for doing so.

The Tufa rock of the Loire remains relatively dry, the average temperature in a cave remains a fairly steady 12 degrees centigrade, or about 54 degrees Fahrenheit, winter and summer, caves are sheltered from windstorms, and at no risk from fire. Some of these cave houses are simple rude shelters, while others have front glass windows installed, verandas, and central heating. There are also complete Troglodyte villages.

No way should one visit Saumur or France without experiencing a wine tasting. In the heart of the world’s oldest vineyards, are the Bouvet Ladubay vintners, and they consider wine to be a living art. They say the wine gets its character from several very important elements. The diversity of microclimates, picking the grapes under the strict supervision of oenologists appointed by Bouvet Ladubay, hiring workers they call the true “gardners of chenin”, and from the Tufa stones in the eight kilometers of underground caves where the wine is stored, are all necessary ingredients. Bouvet Ladubay has artfully crafted various posts and pillars in the wine cellar with the aged look of crumbling Doric columns, pieces of statuary, and weathered lintels.

While discovering the wine, there is the notion that one is discovering an ancient Roman ruin as well. This is probably a small tribute to some of the first grapevines brought from Rome to the Valley. Some say that Buovet Ladubay discovered the secret for their award winning wine that had only previously been known to the old monks of the Abbey of St. Florent. There is a movie shown about the wine, a tour of the eight kilometers of cellar, and a tasting everyday. Visitors are welcomed and will not be disappointed. 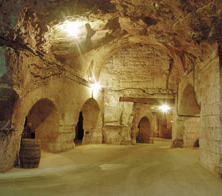 The Chateau and Donjon de Loches

Side by side in Indre-et-Loire are the Chateau and Dungeon of Loches. These two magnificent Medieval French buildings are situated on a rocky spur overlooking the valley below. This royal dwelling place that was enjoyed by several of the kings of France is built over a castle that existed in the 5th century. It was in the Great Hall in June 1429, after her victory at Orleans, that Joan of Arc came for an audience with the Dauphin Charles to persuade him to march to Riems to be crowned. Charles VII established his royal court at Loches. His court became notorious for the wild parties and decadent feasts that were staged primarily to impress the great and especially the strikingly beautiful king’s mistress, Agnes Sorel. It seems that Agnes loved to be scandalous, and dreamed up the shocking idea of wearing silk underwear. She would wear revealing bodices with laces that the Catholic Church called the “gates of hell”, and on occasion she would saunter around court bare breasted. Her tomb is in the Great Hall.

The Dungeon was built around a 5th century monastery and was a major stronghold throughout many conflicts. It served as a military fortress up until the 15th century, when it was converted into a prison by Louis XI. The gruesome torture chamber was a busy place for those not willing to confess political secrets. On the other hand, Many famous and influential personages were sent to Loches and were fairly well treated. During the Italian wars, the Duke of Milan, Ludovico Sforza was captured and imprisoned there from 1504-1508. He was a lover of the arts and a patron of Leonardo da Vinci. His cell that is open for visitors to see, is quite large, has a fireplace, a latrine room, and widows for light. His court jester kept him company, he was allowed to exercise in the courtyard, and women were brought to him on request. Not satisfied with these perks, he painted stars and other designs on the arched ceiling of his cell in order to brighten things up a bit.

In Saumur it is possible to explore the area’s pre-history. A few minutes away in Bagneux you may step back in time and walk around inside the largest Megalithic structure in Europe, It is the Dolmen de Bagneux which is made up of 15 stone slabs weighing an estimated 500 tons. Some say that it is the most majestic of the megalithic monuments. It probably dates back 5,000 years to the late Neolithic or early Bronze Age periods of pre-history and is probably one of the most majestic French dolmens and the largest of the 4,500 dolmens spread out on about 60 French departments. The overall length of this dolmen is over 75 feet and its chamber is over 60 feet long. It is uncertain what the Dolmen may have been used for. Guesses are that it was used for ceremonial purposes, or that the clan may have used it for burying the dead.