The winter-blooming snowdrop and spring snowflake appear so closely related that the great sixteenth-century herbalist John Gerard named them the Early Blooming Bulbous Violet and the Late Blooming Bulbous Violet. He also asserted that neither ancient writers nor his contemporaries had anything to say about the plants’ medicinal properties, and that both were cherished solely for their beauty and fragrance. Gerard regarded bulbous violets as garden plants introduced from Italy, although the snowdrop, which was to accumulate much lore in England, may be native there.

While the snowdrop became a Mary flower because of the white bloom and the association with the feast of her Purification, the flower’s association with purity was so far extended by the nineteenth century that Snowdrop Bands—chapters of a society for the encouragement of working-class girls to espouse chaste lives and avoid indecency—were organized. The journal of the society was called The Snowdrop, and members carried cards with a picture of a snowdrop and a promise to avoid indecent conversation and immoral literature. The groups held “brown suppers,” during which members potted up snowdrop bulbs, and “white suppers” when the snowdrops where in bloom (Paula Bartley, Prostitution: Prevention and Reform in England, 1860–1914).

In English folklore, Snowdrops are thought unlucky if brought into the house, representing death or parting from a loved one. A single Snowdrop blooming in the garden warns of impending disaster. Wearing a Snowdrop is said to bless you with pure thoughts. Bringing a Snowdrop indoors will lead to a death in the house. This led to the plant also being known as Death’s Flower. 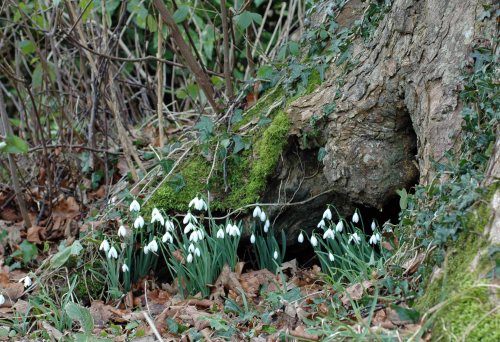 Snowdrops are iconic flowers that traditionally herald the ending of winter and are surely too well known to need a description.

Conservation status: Rated as Near Threatened (NT) according to IUCN Red List criteria.

On the European continent Snowdrops grow in wild habitats, in damp woods and meadows up to 1,600 metres; the leaf tips are specially hardened for breaking through frozen ground. In Britain, Snowdrops are possibly both native and naturalised and were not recorded as growing wild here until the 1770s. It is very likely that many of our colonies of wild Snowdrops originated with ecclesiastical plantings. The pure white blooms of the Snowdrop have long been accepted by the Catholic Church as a symbol of Candlemas, celebrated on February 2nd, the Feast of the Purification of the Virgin Mary, and their association with monastic sites is apparent right across Britain.

Although the flowers are sanctified for Candlemas, the snowdrop is one of the many white blossoms that are still regarded as being unlucky if brought into the house. In parts of Northumberland, Westmorland and Hampshire, single flowers particularly are still viewed as ‘death-tokens’. This may be as one Victorian explanation was that the flower “looked for all the world like a corpse in its shroud”. According to the ‘language of the flowers’, the snowdrop was an emblem for virginity, and a few blooms enclosed in an envelope were often used to warn off over-ardent wooers. In a similar vein, in Yorkshire there was an old custom, again celebrated on Candlemas, for village maidens to gather bunches of snowdrops and wear them as symbols of purity. (extracts from Flora Britannica, Richard Mabey)

The alkaloid Galantamine, which was initially isolated from snowdrops, has been used in treatments for Alzheimer’s disease, neuritis and neuralgia. In parts of eastern Europe, rubbing snowdrops on the forehead was a folk remedy used for pain relief.

Known hazards: Snowdrops and their bulbs are poisonous to humans and can cause nausea, diarrhoea and vomiting if eaten in large quantities